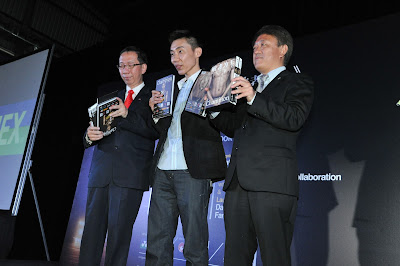 Lee Chong Wei is no common athlete. National hero in his home land of Malaysia, the hard working and talented Chong Wei has won everything but two major titles – World Championships and Olympic Games – he was short of one point only to bag Malaysia’s first evern world crown in the men’s singles this summer in London. He explains how that happened, and how he felt at that precise point in a biography published this wednesday January 18th.
“Dare to be a champion” is the title of the book – one of the few badminton biographies and the only one about a shuttler still in the circuit ( Peter Gade will shortly be publishing his own biography) and oversees Chong Wei’s career, with its ups and down, amongst which this moment where he was so close to the Graal in London, in the summer of 2012.
The autobiography of Dato' Lee Chong Wei relay to the public his path to achieving success at the world stage after humble beginnings in a small town. He also share interesting moments during his illustrious badminton career's and his future goals and objectives in his autobiography.
Here is another excerpt from ‘Dare to be a Champion’, an autobiography of Lee Chong Wei.
June 1996, I was 17.
I was really looking forward to the new life in Kuala Lumpur. I imagined it would be a very different system of training from what I had with coach Teh. For the first time, I had to leave home and live away from my family. How was it going to be? Who would be my team-mates and my new coach? I wondered.
A new life was only one step ahead. It seemed so close yet totally unfamiliar, strange. I had mixed feelings about it, no matter how hard I tried to picture it; I was totally clueless about how it was going to be. I was very anxious.
Ever since the day I received the letter, mom had not stopped nagging. She talked about miscellaneous things that I should pay extra attention to. How I should behave and how I should treat my team-mates in the new environment. She was very worried about me, being the youngest in our family, staying alone away from them. I had too much going through my mind at that moment and couldn’t reassure her. When she spoke, I was ostensibly listening, but I actually wasn’t paying any attention to what she was saying.
Life went on as usual before I set out to Kuala Lumpur. The atmosphere at home was as usual, like the way it used to be and it seemed to stay the same forever. Mei Ching, who was the closest to me said nothing either. It was her way of being supportive of every decision I made. I knew it must have been hard for her to see me leave, she was such a kind and thoughtful girl.
She must have been very worried about her little brother leaving home for the first time: whether he would be able to adapt, whether something bad would happen to him, whether he will be bullied. After so many years, my dear sister has never watched any of my matches broadcast live on TV, nor has she been to any of my tournaments. She can’t stand the ruthlessness of two opponents competing with each other. 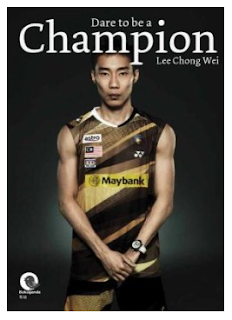 the BWF World Championship, the most prestigious tournament in badminton was held at London’s Wembley Arena Indoor Stadium. I had never made it to the final in this competition, winning only a bronze medal in 2005. This has always been the biggest title that I wanted to win.

Wembley Arena is going to be the venue for badminton in the 2012 London Olympics. Competitors from all around the world saw the world championship as a great opportunity to warm up for the Olympic Games.

I spent a lot of time and effort to prepare for this World Championship. I really wished to excel and win. In the past, I often felt unready, mentally or physically, and I missed the final. This time, I sensed that it was different. I knew it was different.

Lin Dan was my opponent in the final. He walked to the court under the glaring light. Grasping the attention of the world, here we were, on the stage.

We had met each other on the court many times and knew each others’ style of play very well. In the first set, the score was fairly even.

Breathtaking climaxes from varied plays and tactics overwhelmed the crowd and intensified the atmosphere. I played carefully and decisively….

Lin Dan won the BWF World Championship for the fourth time.
We were both worthy opponents in the final as we fought hard till the last. I walked towards coach Tey with a smile. We hugged each other. We both knew we have tried our best. More importantly, I had displayed a stronger mentality compared to the past.

I accepted the defeat without any bitterness. 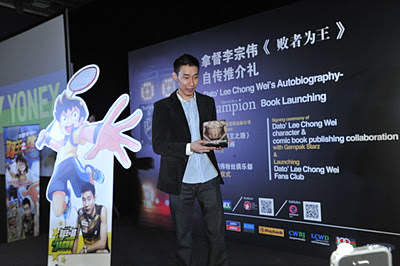 Lee Chong Wei holding a copy of his autobiography ‘Dare to be a Champion’ beside a cutout of the comic "Jejak Libasan Jaguh".

ISN Sports Information Centre is the only specialized sports library in Malaysia. It's aim is to provide up-to-date sports information to the sports fraternity, academic institutions, schools, media and the general public.

ISN Sports Information Centre, located at Level 2, MSN Building, National Sports Complex, Bukit Jalil was established to serve as a centre for the receipt, exchange and dissemination of sports and sports-related information.

Total Pageviews! Thanks for visiting this blog! 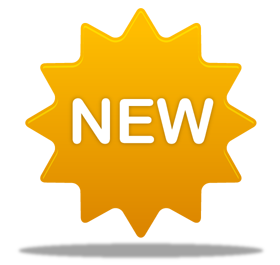 Visit us now!
It's open for Sports Fans!
FREE admission!